What are the different files used for? I noticed the s.jpg files are a much lower resolution.

From what I know h1 is hi-res version for the actual tour. s1 is a low res version.

You only need to worry about the h1

I just received my Planix this morning so have been doing some tests with it.

I was hoping that I would have got some spheres or H1 photos etc to be able to modify say in Photoshop or Lightroom, however, when I look at the H1 etc, they are the photos with me in when I did the 2 shot process, but I am not in the ones that I am looking at in Stitch.

Did I do something wrong ?

Only guessing here, but may be for preview icons on site to speed things up…I know for photos, with the CamRanger, we can set a preview version of small jpg for faster preview loading.

Funny thing, one time I did a nice Photoshop camera removal to only find out I did it to the S version

I was actually just trying to use these three H1.jpg files in another Stitching program and these files don’t work. this is what I just asked in support ticket but not sure if they can help with another stitching software. 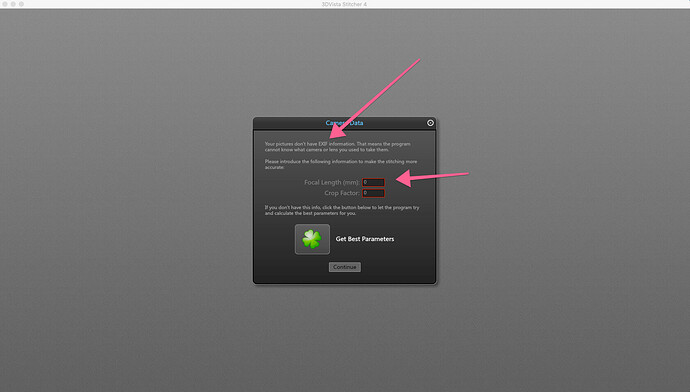 I thought any stitching program should be able to handle these files!?

I just checked some of the h_.jpg and s_.jpg files from my IMS-5 and none of them have EXIF info.

It sounds like the app you’re trying requires EXIF data in order to process the files – either provided by the camera or entered manually.

Have you tried the “get best parameters” button? It might take some trial and error to get the focal length and crop factor that work best. You could manually edit EXIF info for each h_.jpg file but if that app applies the settings you enter across the images, that’s probably much faster.

If you’re using an IMS-5, the focal length on the lens is 5.6mm and the crop factor on a Digital Rebel is 1.6.

These are not files that you would stitch in 3DVista - you would need separate files to stitch into one pano to use that. All you have is spheres.

for your second question regarding EXIF info, you need to get a EXIF Injector like EXIF fixer to inject the 360 info into it.

Well as soon I inserted the focal length and crop factor as per Leroy’s former comment, the 3DVista Stitiching software was able to produce a single panorama/sphere from these 3 files similar to what we get back from iGUIDE once processed through Stitch. Thanks again Leroy!

Thats great to hear - I need to try that.

Would you then do your post processing and use those to upload to iGuide ?

Planix’s Survey will produce either one h1.jpg file (when in single shot mode) or h1.jpg and h2.jpg files (in two-shot mode). Those files are complete 360 images created by Theta. They can be processed in Photoshop or Lightroom before they are imported into Stitch. Stitch will align verticals, apply default color processing (which can be turned off via presets) and will stitch h1.jpg and h2.jpg into a single 360 image, removing you from it. If you still see yourself in the output image (twice), that means you were standing on the wrong side of the camera, but you can right-click on that pano in Stitch and tell it to swap h1 and h2 (Reverse Camera Rotation).

If you want to edit 360 images produced by Stitch, that can only be done once the iGUIDE is published. You can use the Replace Pano function on the Portal to download, edit and upload back 360 images and that will need to be done one image at a time. The same way 360 images can be downloaded and uploaded for virtual staging by a 3rd party service.

Unlike Planix, IMS-5 produces 3 fisheye images (h1-h3.jpg) which Stitch converts to a 360 image using a distortion model individually calibrated for each IMS-5 lens. The h.jpg files can be processed in Photoshop before importing a project into Stitch, but any processing should not involve image distortion and should only be done for color manipulations.

Stitching fisheye images in another software without using proper lens distortion model will most likely result in 360 images where straight lines may be wavy and distorted, that will vary from lens to lens.

Finally, both Planix and IMS-5 create and use downsampled s.jpg files for preview in Survey on smaller mobile screens to save time due to limited WiFi bandwidth, especially when onsite in a potentially very congested WiFi environment.

No, that way i can build a Hybrid tour with 3D vista for the outside area with an embedded iGUIDE for the inside with floor plan but can shoot everything with the IMS-5 camera and decide which images are being processed through the Vista stitching software and which ones through iGUIDE.