Create a video automatically from iGuide

Would a Youtube video of an iGuide (or of the photo gallery) be a useful promotional tool for you?

Before becoming an iGuide operator I used virtual tour software (tourbuzz) that allowed me to very simply generate a Youtube video from the VT. This consisted of a branded or unbranded MP4 created from the image gallery.

A Youtube video from an iGuide would loose a lot of the functionality of an iGuide but clients take a long time realizing this, especially potential new clients who use video as part of their marketing.

In the last month I have been asked for a simple Youtube video 2-4 times. I also hear that realtors are being pushed to use video to increase their google ranking.

Would this be a useful feature for you? Have you been asked if you can create a Youtube video? Would it be worth iGuide spending the time to create this feature?

I recently had a chat with Chris about this.
I have been playing with screen recording an iGuide to make a short (20s) clip for Instagram. It’s a messy process and takes a long time for editing, cutting, exporting, moving to mobile, etc.
Would be very pleased if there was a video tool on the list of projects.

I use a screen capture program to record the iGuide and upload resulting .mov to Youtube – either to my channel or the agent’s. No functionality but agents seem ok with that for the most part.

​Matthew, I want to address your comment about video because it is one we hear a lot and is something we need to educate our clients on.

Video is not the most engaging online content - immersive 360 content is; which is why the major search portals are working so hard to enable 360 content ​within their systems.

Google (owners of YouTube) are working very hard to enable 360 content across their platform because they recognize the traffic and user engagement it gets.

When Alex and I were in Tokyo at the Google Summit, they spoke at length about the power of 360 to build and retain online engagement and they are rewarding 360 content creators and providers with better search optimization.

If that is not enough

Look at the study of Home Buyers, produced by the National Association of Realtors. 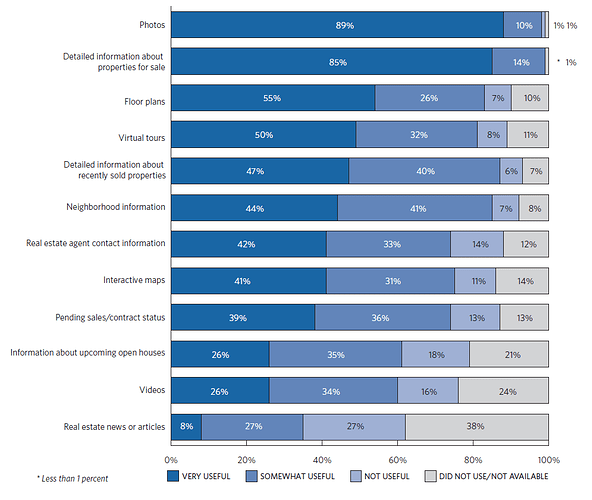 I hate to point out the obvious, but do not forget #3 floor plans. I think that is the best part.

I don’t disagree with you at all Kevin, but Facebook is the only social platform that enables 360 content at the moment. They all have some form of video capability, and not all platforms enable linking (Instagram for example doesn’t allow you to follow URLs).
How can we get people to the iGuide from all these social platforms? What is the best way to get a viewers attention to change their behaviour? How can I get someone to stop scrolling past my posts and investigate further with regards to whatever I am posting about?
Should we be pushing an aggressive education campaign? Time for me to write my next e-blast…

While I think we’ll all agree 360 degree content is the most-immersive technology out there, that doesn’t mean video isn’t important. Google has been pushing video for quite some time now and it also helps with SEO. People know and understand video. It’s easy to view a video on a cell phone, an iGuide on a phone isn’t nearly as immersive as it is on a computer.

I have no idea whether it’s a good idea (or not) to have a video of the iGuide tour but I wouldn’t pooh pooh video at all. It’s still the king out there and will be for quite some time.

Video of an iGuide can be mistaken for iGuide itself, because it looks the same. But unlike iGuide or iGuide in Autoplay mode, video allows zero interactivity. We would not want first time users to think that iGuide is video when they see real iGuide UI next time.

If moving pictures are needed, then iGuide in Autoplay mode is recommended. If posting to Youtube is needed, then there are other options like drone video, moving gallery images, etc. You can also look into creating a video from photospheres, something along these lines:
https://www.quora.com/Can-I-convert-a-photosphere-jpeg-image-into-a-360-video

When agents request a video of our other (non-iGuide) tours I use screenflow on my Mac and do a video capture of the tour. I believe the same thing could be done using the auto play feature of an iGuide. Off the top of my head I would say that I would highlight one or two of the nicest rooms, add in the floor plan and a link to see the whole Iguide.