OK I don’t really have a smart phone with a 10 inch screen, but I did want a display larger than my smart phone for iGUIDE generation but on a budget. I am currently testing a 10 inch Amazon Fire tablet. The trick with this is that it does not support Google Chrome without work. It has been a bit of a challenge but it is now working. The appeal is that I will have a $150 10" touch-screen HD tablet which gives much more space for viewing images and adjusting scans. I’ll update as I make progress if anyone is interested.

I’ve always used a 7.9" iPad Mini for shooting iGuides. I bought a rubber case that protects it, which also came with a comfortable lanyard so it can hang from my neck when I need to keep both hands free. And it fits nicely into the IMS-5 case. There are lots of second-hand iPad Minis available and even an older iPad Mini would suffice, since it just needs to run a browser. (Chrome runs just fine on it.)

One time I tried using my 12.9" iPad Pro for a shoot, but that was awkward because of the size. The Mini hit the sweet spot for me.

I was going for the non-Apple budget

I use a cheap Samsung tablet I bought used about 3 years ago. The system surprisingly does not require much of a pad. It’s a cheap enough tablet that if I drop it or knock it off a piece of furniture or a ledge I’m not going to cry and just will fire up my phone to finish the job

I was going for the non-Apple budget

Gotcha. Overall, I’m not a fan of Apple products, but I do like their tablets. Things work without issue.

I use a Microsoft surface pro and it works fantastic. Also have the added advantage of having stitch installed on it. Add the 4GLTE to it and I am sending the data for processing before I ever leave the shoot.

Good topic - so most of you prefer a dedicated tablet rather than using your phones?

Agreed on the lanyard, that’s a lifesaver.

Upgraded my phone last year to get a larger screen for use with the Survey app - Samsung A70, no issues to date but am interested in upgrading to a tablet of some sort.

Leroy made a great point about the 8 inch device. If I had purchased one of these the budget would have been about $50!

Good topic - so most of you prefer a dedicated tablet rather than using your phones?

200%. For me it’s a matter of speed/convenience/accuracy.

I started out with a dedicated 10 inch iPad I got from MicroCenter for about $240. I wanted a dedicated iPad because I want employees to be able to use this and not access my personal iPad.

I also started out with this stand (also from MicroCenter). It can be great a lot of the time, but gets cumbersome when you’re in tight spaces. The stand was about $60 and I’m sure I’ll find other uses for it. (initially it was intended as a terminal for a Photo Booth business)

I found myself doing a lot of walking back to the iPad when I could have simply been standing behind the camera.

So now I’m trying one of those iPad holders and I’m using it like a BlackRapid camera strap, where the iPad hangs by my side when I’m not using it.

When I first started to use the iPad holder like a classic camera strap (hanging around my neck) if I went to move something, the iPad would swing out in front of me and bang into what ever I was trying to move.

I’m near sighted, so it’s easy to see the iPad without glasses and I like the ease of looking at a 10 inch screen. For now I’m happy with the new setup. 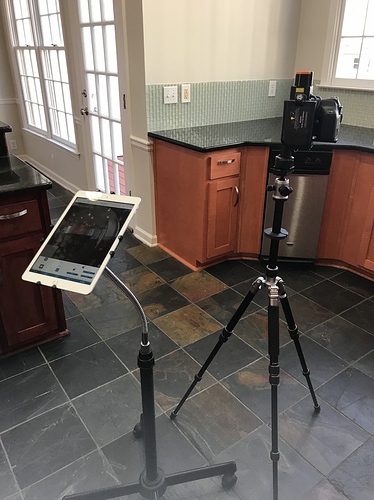 I am using a shockproof case with strap and hand grip
https://www.amazon.com/BRAECN-Shockproof-Protective-Rotating-Generation/dp/B07TB5QX5N/ref=sr_1_7?dchild=1&keywords=carry+bag+with+strap+for+amazon+fire+10&qid=1587050560&s=amazon-devices&sr=1-7-catcorr

Kevin, that’s the same one I migrated to, after I retired my stand. Do you use it hanging by your side or let it hang in front of you?
I liked having the iPad out of that case because it fit nicely into the iGuide case. So it was very compact. But on the other hand, now I don’t have to lug the stand with me, so its a better trade off.

I have it over my shoulder so that I can prop it in front of me.

Here’s what my setup looks like. I keep my iPad Mini hanging from the lanyard around my neck.

Everything fits nicely in the foam slot. Nice and simple. 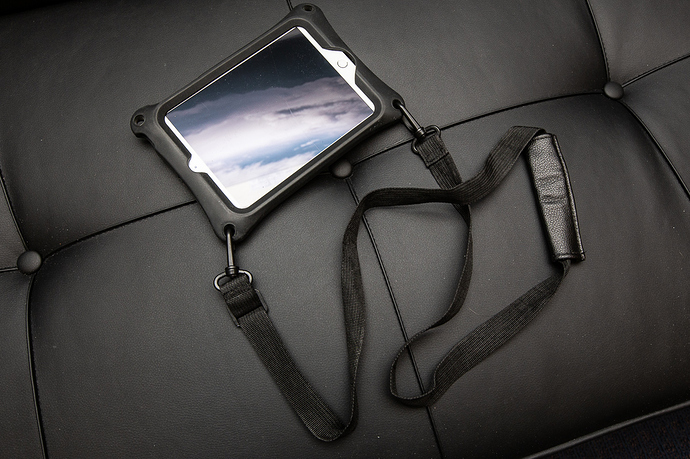 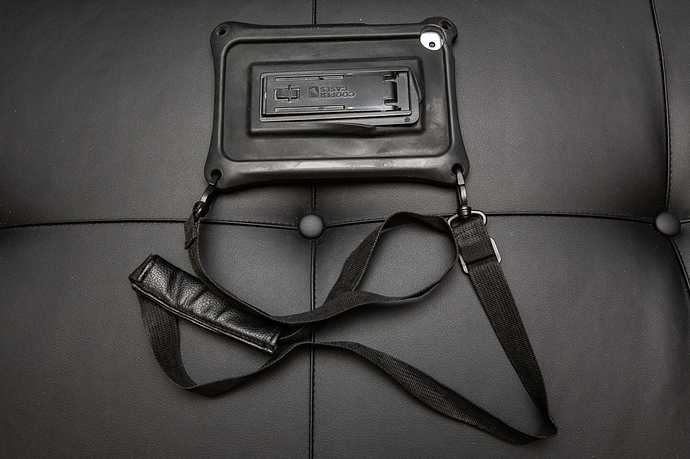 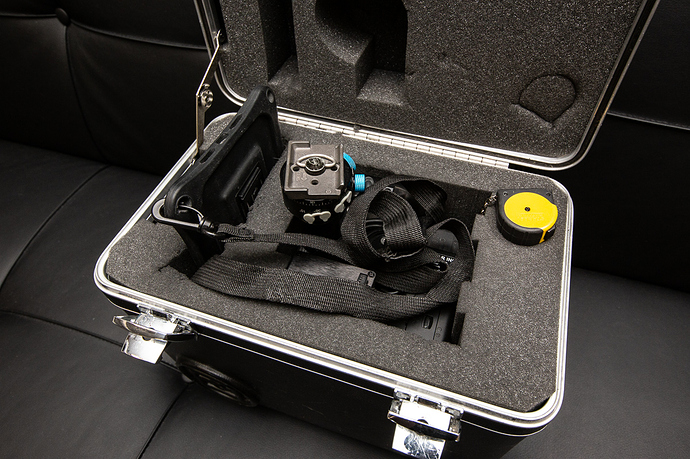 Thanks for the pics Leroy! It really convinced me that I need the same set up.

You’re welcome. I’ve found it very helpful to keep your hands free to reposition your camera or move objects.

I use something very similar to what Leroy uses for my 10 inch iPad and I love it! If you do use an iPad, using the screen rotation lock is a big help too. It helped tremendously to speed up my time during a project.

Agreed. I’ve since moved on to a 12.9" iPad Pro on a lanyard so it no longer fits in the iGuide case but I’m more efficient with it than I was the iPad Mini.

I’ve got my first shoot in a couple of weeks and was looking to see if the Surface Pro can run Stitch for that same reason. I’d hate to miss something and find out when I get home. Once I get into a routine, I’m sure that risk lessens, but until then…

Any tips or quirks you can share for using Stitch with the Surface Pro??

Which Surface Pro are you using?

I’ve been intrigued by what using a full-blown computer onsite would let me do to automate steps versus an iPad.